The Guardian of the Cemetery

​A Canaque legend, recorded in verse by Louise Michel in New Caledonia in 1875.
Translated from the French by Robert P. Helms 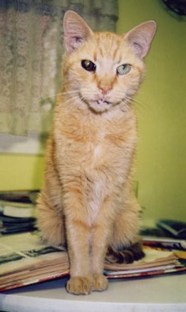 Harry the Cat, Thanksgiving, 2004
[The anarchist Louise Michel was exiled to New Caledonia in the South Pacific after the suppression of the Paris Commune in 1871. She had fought with the communards and served as director of elementary schools. While in New Caledonia, she learned the native language and then recorded songs and legends of the native Canaque people. - Ed.]
He is there night and day, old Nehewoué, the guardian of the cemetery.

Each rising sun finds him sleeping, exhausted as he is by night work, and the light of every moon sees him stand.

He knows, old Nehewoué, how to conserve the spark that animates the old man, and he can extinguish the hearts of strong men, just as we suffocate a torch underneath our feet.

What do the bones say to you, Nehewoué, when they crack in the branches with the wind's breath?

Why have you become powerful and terrible, Nehewoué? It's because you live with the dead, and death is more powerful than life.