​Love and Anarchy: A Profile and Interview with Paul Avrich 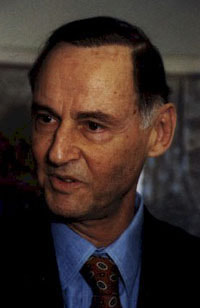 [Susan Phillips is a Philadelphia-based radio journalist. This profile was done as a course assignment during November and December of 2002,
​while she studied at Columbia University's School of Journalism in New York City. Paul Avrich died February 16, 2006, at the age of 74. -- Ed.]
For Paul Avrich, friendship, love, and anarchy are inseparable. He loves history, he loves his cats, he loves workers, he loves children, he loves teaching, he loved his father. However, he is best known for loving anarchists. "I've known thousands of anarchists and the percentage of them I didn’t like is very small," says Avrich. At his sparsely furnished Upper West Side apartment, overlooking the Hudson River, Avrich speaks quickly and passionately about the people and the movement he spent a lifetime chronicling. "I loved these people," he says, leaning forward with his hand clutching his heart. "I think about them every day."

Avrich has done more than think. He has published 10 books on Russian and American anarchism, including the seminal work on the Sacco and Vanzetti case. Sacco and Vanzetti: The Anarchist Background was nominated for the National Book Award and the Pulitzer Prize in History. In total, four of his books have been nominated for the Pulitzer Prize, and in 1984 he won the Philip Taft History Award in History for The Haymarket Tragedy . His books have been translated into Spanish, French, Italian, and Japanese. He has edited several re-publications of classic anarchist works, including Peter Kropotkin’s Mutual Aid and Alexander Berkman's What is Communist Anarchism? He has published over 100 book reviews and written countless articles on anarchist history for both academic journals and anarchist publications worldwide. As part of his effort to catalog the stories of dying anarchists, he learned Russian, French, German, and Yiddish. While a history professor at Queens College and the Graduate Center of the City University of New York, he taught a course on the history of American anarchism for almost 30 years until his retirement in 1999. When the Encyclopedia Britannica published its 15th edition and needed a biography of the Russian anarchist Peter Kropotkin, they called Paul Avrich.

Julie Herrada, curator of the Labadie Collection at the University of Michigan, which houses the largest collection of anarchist research materials in the country, says Avrich is well-known among anarchists as well as within the larger community of academic historians. "He’s considered the expert on anarchist history in the U.S.," says Herrada.

Among the many strands of anarchism lies the basic belief that all forms of government oppress people. The early anarchists were idealists who sought to create a world free of coercion, where people would live collectively, solve problems communally, and base their economy on mutual aid. In America, the anarchist movement asserted itself strongly in the early labor movement, fighting for the weekend and the eight-hour work day. Anarchists were active in the free speech fight and the first-wave feminist movement, calling for reproductive rights for all women. Their tactics ran the whole gamut from assassinations to pamphleteering. Although American school books reveal no traces of their existence, they are known worldwide through the legacy of May Day, an international holiday created in honor of the Haymarket martyrs.

Avrich did not start as an anarchist historian. In his clutter-free apartment, where he has lived for more than 30 years with his wife Ina Avrich, bookshelves line the walls. Two rooms house the anarchist books, but one room contains rows of Russian history. Paul Avrich began his career as a student of the Russian Revolution.

He grew up in Brooklyn, the son of a fabric cutter who attended the Brooklyn public schools. At the age of 16, he entered Cornell University on a scholarship, graduating in 1952. Although he would not reveal his exact age, he is probably in his late 60's or early 70's. His thin, wiry build still moves with the energy of a young man, and he seems to have never lost his youthful wonder at discovery. His enthusiasm for history, for the old anarchists, and for friendship, supersedes a slightly shy nervousness. He says he loves talking to strangers.

In 1961, Avrich got the chance to take his love of friendship abroad. He had entered Columbia University in 1957 as a PhD student in Russian History, taking courses in Russian language and researching the role of workers in the Russian Revolution. His interest in working people originated with his love for his father. "I admired my father and I always admired workers," says Avrich. "They had to know how to do all sorts of things."
At the time, not many people in the U.S. studied Russian History, or even the history of workers. With the cold war in full swing, Soviet leader Nikita Krushchev offered to initiate a student exchange. Avrich was one of 12 students chosen to travel to the Soviet Union. "I was delighted to go there," says Avrich, clapping his hands together as if the trip were tomorrow.

Avrich met his first anarchists in the archives of Moscow’s Lenin Library. For anarchists, or those familiar with anarchist history, the irony runs deep. Lenin had no love for the anarchists.

"I was always anti-communist," says Avrich. "I could sense that I did not like these people." But he did like workers, and because no one had written an English language book about the Russian working class in 1917, he set himself to the task. For three months Avrich poured through archives in Moscow, reading the detailed minutes of factory workers’ meetings at the time of the revolution. When he discovered the words of the anarchists, he says, he had never heard of anarchism. "The more I read, the more I liked the anarchists because they seemed like decent, nice people."

Back in the states, Avrich got his first taste of how despised these "nice people" were. After finishing his dissertation he told his professors that he would like his next project to be a book about the Russian anarchists. One professor looked scathingly at Avrich and said, "You’re such a good scholar. Why would you write about the anarchists?"

Stunned, Avrich held his ground, which he says was not the common practice in those days. "I vowed that if I could become a professor I would never do that to a student," he says. "My interest was so strong."
Avrich began teaching at Queens College in 1962 and says that although Russian History remained his field, his interest in anarchist history blossomed. He was married and had his first daughter Karen, but he had yet to meet his first living anarchist. Then, while researching his first book The Russian Anarchists , Avrich discovered that a group of anarchists met at a restaurant on 77th and Broadway. "I walked down there all dressed up and carrying my briefcase," he said. "I wanted to [appear] to them as a nice young man." They thought he worked for the FBI.

Nevertheless, Avrich’s heartfelt sincerity won them over. Through this group, he formed connections that would send him chasing down the memories of thousands of anarchists, their children and grandchildren. He found Kropotkin’s daughter, Princess Alexandra, living in a small apartment on the Upper East Side. His conversation with her eventually wound up in Anarchist Voices , his collection of oral histories.

Avrich’s daughter Jane, now 37 and a published short story writer, remembers long walks with her father through the Upper West Side to visit old anarchists in small, dark, dusty apartments. She says many of the anarchists were initially suspicious of him her father and afraid of being deported. "Dad is an extraordinary researcher and detective and he just let people talk," says Jane. "He knew how to ask questions at the right time."

Jane says the anarchists came to think of her father as their son, and he returned the favor. "He was tireless in his attention to them,' she says. "He loved listening to them and they really needed to talk." Avrich would tell their stories at the dinner table, and hold what the family called "The Bomb-Throwers Balls," parties in which Jane and her sister Karen would serve hors d’oeurves while the anarchists held heated discussions about vegetarianism, anarcho-syndicalism, and anarchist utopian colonies. "They were whacky people," says Jane. "They'd have these fierce debates about the past."

Avrich turned these stories into historical records that read like novels. Curator Julie Herrada says their readability has made a lasting impact. "He brings the stories of the early anarchists to the mainstream," she says. Herrada says Avrich also makes himself available to anyone she sends his way. "He’s dedicated to the cause of learning and to education about anarchist history."

Bob Helms, an anarchist historian who considers Avrich a mentor, agrees. "He's a passionate teacher, he says. When Helms became interested in anarchism as a student at Temple University in Philadelphia, he picked up a copy of An American Anarchist: The Life of Voltairine de Cleyre . De Cleyre lived in Philadelphia for some 20 years, so Helms used Avrich’s book to follow leads that would uncover the history of the Philadelphia’s early anarchist community. "My research takes a slightly different approach," says Helms. "It's geographical rather than biographical, but I certainly caught the bug from Paul."

When Avrich began to focus his research on the history of American anarchism, he says that almost nothing had been written. He says that, before he saved the "poet-rebel" de Cleyre from obscurity, very few historians wrote about women. "I found her a fascinating person," says Avrich. "I read her poetry and stories and found a sadness in her."

Anarchist Bob Helms calls Avrich's contribution "colossal." He says that Avrich's books give contemporary anarchists like himself "shadow comrades." "When I read Paul’s books, it's so clear that the flavor of being among anarchists hasn’t changed. The same people are attracted to it and the same problems come up." He says that the characters Avrich has rescued from obscurity provide modern anarchists with role models and moral support. "This is why the Catholic Church creates saints," says Helms.

But there are plenty of anarchist saints that Avrich regrets never reaching, and here he is visibly pained, grasping his head in his hands over the unbearable agony of missed opportunity. In the case of Princess Alexandra Kropotkin, Avrich berates himself for not visiting her more before she died. "I was such a stupid ass, and she had so much more to tell me."

Although Avrich calls himself an anarchist, he says that some kind of government is necessary. "I would like to say it could work, but people would have to get along with each other very well."

Currently he is working on a book about Alexander Berkman, the Russian-Jewish anarchist who shot Henry Clay Frick during the Homestead steel strike of 1892.
Avrich does not shy away from controversy in his books, treating the anarchist acts of violence honestly and in the context of the time. He does not condone the violence of Berkman, but says he still admires his decision, considering how brutal Frick acted toward striking workers. But Avrich does not have the same patience for some contemporary anarchists, who choose to destroy property and who, he says, come mainly from educated and middle-class backgrounds. "I’m not so crazy about anarchists these days,” he says. Anarchism means that you leave other people alone and you don’t force people to do anything."

He says he is sad that the old-timers are not around to guide the resurgent movement. "They were nicer people –much nicer people." Their deaths have taken a toll on him. "It’s been terrible for me," he says. "They were the people who meant the most to me. I admired them and wanted them around the most. There’s nothing else that is me."