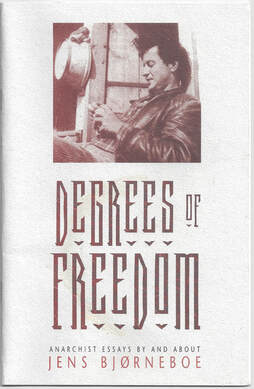 Jens Bjørneboe (1920-1976) was the best known and most controversial of Norwegian anarchists in the late twentieth century. He was a poet, playwright, essayist, and best-selling novelist who was both honored and banned in his home country. Today, twenty years after his death, his complete literary works are being republished in Norway where he remains a popular writer of almost cult status, particularly among the young and the left. This pamphlet is the first publication of Bjørneboe’s anarchist essays in English.

The first short essay, “Anarchism as Future,” gives a succinct picture of Bjørneboe’s conception of anarchism and acknowledges the influence of Kropotkin on his thinking. The second, longer essay entitled “Anarchism…Today?” develops the ideas of the earlier essay, particularly by setting anarchism in contrast to both capitalism and Marxist-Leninist communism. Although dated somewhat by the glowing references to Mao, the essay still stands as a progressive polemic. Many of Bjørneboe’s ideas and insights hold true even today; his statement, for instance, that “we have much to learn from the non-European, revolutionary lands, from the new states which today are struggling toward true autonomy” is still accurate, even if the locations have changed.

The third essay contained here is not by Bjørneboe, but is rather about him. It is a chapter taken from Inge S. Kristiansen’s book Jens Bjørneboe og Antroposofien (Jens Bjørneboe and Anthroposophy). Kristiansen’s book is concerned with the influence of the ideas of Rudolph Steiner (1861-1925) on Bjørneboe’s life and work. In this particular chapter, he focuses on the seeming tension between Bjørneboe’s mystically-oriented anthroposophical ideas and his radical politics. Kristiansen gives more background on Bjørneboe’s anarchism and more information about the influence of his anarchism upon his literary works than we are able to get from Bjørneboe himself.

“There is a close connection between the subjects of Bjørneboe’s articles and those of his longer works; his preoccupation with a particular injustice often bears fruit in both fictional and non-fictional form" according to Garton (p.13). In the case of his anarchism, this is especially true. The ideas expressed in these short essays underlie almost everything Bjørneboe has written. In this sense, the essays that follow serve not only as an introduction to his literary works and the battle against authoritarian ideologies and institutions that he waged there.
Jens Bjørneboe (1920-1976) was one of Norway's most noted post-World War II authors. A poet, playwright, essayist, and novelist, he was both banned and honored in his home country. He is best known for his works of fiction, particularly the History of Bestiality trilogy: Moment of Freedom (1966), Powderhouse (1969), and The Silence (1973); and his bestselling final novel, The Sharks (1974). A controversial figure both during and after his lifetime, Jens was a complex personality embodying a variety of influences from Anthroposophy to Anarchism.

The above essay is the introductory piece in the Degrees of Freedom: Anarchist Essays By and About Jens Bjørneboe.