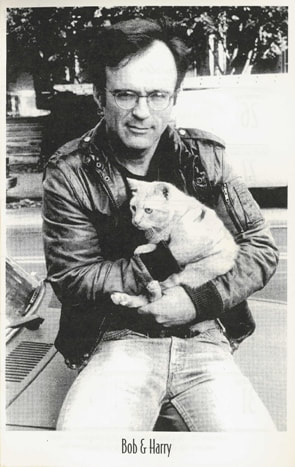 Bob and Harry in the Anarchists and Their Cats 1999 Calendar Photo credit: Violetta Vendetta
I really miss Harry. He only lived with me for about seven years, but the impact he made on me was greater than any other animal I’ve ever known. He was the most loving and most demanding animal companion I've had. An orange male tiger-striped cat with mis-matched eyes (one brown, one green), he usually acted more like a dog or an infant. He announced his presence with a commanding “Mwowr,” demanded the attention of any humans present, and knew that his rightful place was in my lap or slung over my shoulder like a baby.

Sometimes, using feline baby talk, he was called "Haaawy," which led some people to mistake his name as "Howie." Sometimes he was “Harry the cat” as if the humans around him needed to be reminded that he was actually a member of the genus Felis.

I first met Harry in 1989, soon after I moved to Philadelphia, in the home of Janet Stokes, a member of Central Philadelphia Monthly Meeting of Friends. Janet owned several cats and lived in a small colonial-era row house in the Queen Village section of Philadelphia. I went to her home for a meeting, and remember Harry, who was at that time called “Simon,” coming yowling up to the group and demanding to be petted. He jumped into my lap, rubbed his head against my body, and demanded “More, more, more!” I thought he must have really taken a shine to me, cat-lover that I am, but Janet deflated that idea with a clipped British insistence that, “Oh, he’s that way with everybody.”

On January 1, 1998, Janet died of a heart attack while sweeping the snow off her front steps. Her brother and sister arrived from England to take care of things, but it was Friends from her Quaker meeting who took care of dispersing or disposing of most of her worldly goods. One Friend took charge of finding homes for Janet's cats. And this takes us to the part of the story where Harry earned his anarchist chops.

Dead Anarchists editor Bob Helms had recently returned to Philadelphia after living in France. He had a 2nd floor apartment above our local West Philadelphia food co-op, and Bob had mice. Bob needed a cat. I told him I knew someone trying to find homes for some cats. Connections were made, and an orange cat was delivered to the parking lot next to Bob’s apartment. Within the next few days, several dead mice appeared in the bathtub and various locations throughout the apartment. Bob no longer had a mouse problem.

The Friend who delivered Harry to Bob told him she thought his name was "Simes." (It was years later, when I saw Janet's brother again, that I realized that "Simes" was a nickname for "Simon."). But when Bob took in the cat, he renamed him "Harry" in honor of Chaim Leib Weinberg, an early twentieth-century Philadelphia anarchist whose memoirs Bob was at that time trying to get translated from the Yiddish. In the movement between households, Harry's medical records were misplaced and we never really knew how old he was, or if he had lived with anyone before Janet. One Friend believes that Janet let her cats out of the house and they would go to a field behind the row houses. Harry certainly had an air of "street smarts" about him, although he never complained about becoming a house cat in our busy West Philly neighborhood.

At about this time, a young woman in the neighborhood got the idea to produce a calendar entitled Anarchists and Their Cats . Bob and Harry were featured as the February, 1999 illustration. They posed outdoors on the hood of Bob’s old pickup, both looking tough but vulnerable. The calendar was a big hit.

Eventually, Harry came to live with me. At first, I wasn’t happy about it. Not only did he have parasites of all varieties, probably a remnant of his field-roaming days, but he gave my contented-to-be-the-only-cat, Leila, an extremely hard time. I took Harry to the vet’s and had him treated for fleas, ear mites, and worms all in one visit. When he came home, he sat very quietly with his eyes closed and his front paws folded under him. It was so unlike his usual personality that I panicked and then felt guilty – had I arranged for this poor cat to be poisoned by too much medical treatment? Would he live? Would he forgive me? After a day or two he was back to his old self, but he’d managed to wholly win over my sympathies. From that day forward, Harry ran my household. 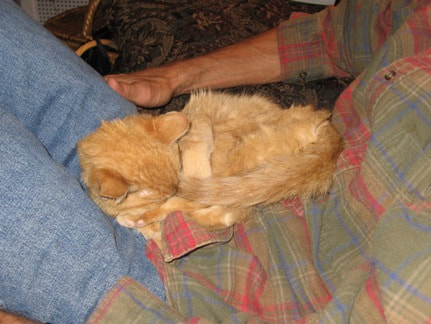 Harry practicing "samadhi" two weeks before his death. Photo credit: Alison Lewis
​Within a year I bought a house with a lot more room and soon we were joined by two more cats - kittens that someone surreptitiously left on my doorstep. Harry immediately took on the role of Alpha Male in the household, and ignored my warning that this attitude could cause his anarchist credentials to get called into question. He could be tyrannical with the other cats, but essentially acted as a benevolent dictator to the humans in the household. “Aloof” was simply not in Harry’s vocabulary. Nor was “down time” or “personal space.” If I was sitting, Harry was in my lap. If I was walking, Harry was following. If I was standing, Harry was demanding to be picked up and held. The only relief you could find from Harry’s attentions was when he was busy bestowing his affections on another human in a different area of the house, or if he was asleep.

Cats are territorial animals and I often see this played out in my multiple cat household.
The cats share space, but each one tends to have a particular area they claim as their own – a chair, an end of the sofa, a warm corner in a particular room. Harry had territory, but it tended to be mobile – it was any space within a yard of where the humans were. Harry was also a master of strategic placement. One photo I have of him was taken on Thanksgiving Day, when he decided to plant himself on my open cookbook. I was trying to follow a recipe for turkey stuffing and my hands were covered in butter and breadcrumbs. Since I wouldn’t pet him and I kept looking at this book, he placed himself square in the middle of what was distracting me from my true task of paying attention to him.

Harry was the friendliest cat I have ever met. He was energized by all the attention he received and he rewarded his admirers with his own attention, deep purring, luxurious stretching, loving looks, and warm body. Harry loved everyone. Anyone new who came to the house, he immediately won over. He flirted. He softly tapped people on the arm to get their attention. He climbed into people’s laps and rubbed his head up against them, demanding “More, more, more!” Janet had been right – he really was that way with everybody.

One incident that sticks in my mind was the night when the two youngest cats found a mouse in one of the upstairs bedrooms. Callow youths that they were, they were very interested in this small creature but had no idea of what to do with it. The sounds they were making were very unusual, so I went to investigate. When I found them, they let the mouse go and it ran into my office, where I’d just been sitting on the floor. My first thought was, “Oh, no! A mouse in the house!” My second thought was, “Get Harry!” I found Harry asleep on the dining room table and I shook him awake. “Harry! There’s a mouse upstairs!” He looked at me dreamily. I carried him upstairs and plopped him down in my office, near where the younger kitties had cornered the mouse again and were dumbly staring at it. Harry caught sight of the mouse, and it was like watching a top-of-the-line Porsche go from zero to sixty in four seconds, except faster. Harry was suddenly wide awake and springing into action. The commotion brought Leila into the room. Four cats were now menacing one very small, very frightened mouse.

Don’t get me wrong. I do love all creatures, great and small. But I know how destructive mice can be and I didn’t want one in my house. And I didn’t want to be the one to kill it. Better, I thought, for the younger cats to have the opportunity to learn some hunting skills from the older ones. And that is exactly what happened. I won’t describe all the gory details, but I will say that the mouse ultimately met its demise and I removed its poor carcass before it could be eaten. I still see the younger cats playing with their toys, using some of the same techniques they learned from Harry that night. And I’ve never seen another mouse in the house since.

Toward the end of his life, the household rule of “what Harry wants, Harry gets” was expanded to include getting fed canned cat food three or four times a day, as he was starting to have trouble assimilating his food. He was also allowed to venture outside of the house on his now-wobbly legs, perhaps reminiscent of his days with Janet. His appetite seemed to improve in the open air, and he would raid the food bowl left for the family of stray cats on the back porch. Harry would also stumble down the back steps and take off walking down the alley. He’d be patiently followed by John, another favorite human companion, who’d eventually pick him up and carry him back home. In hindsight, it seemed like Harry knew it was time for him to “go.” He wasn’t sure where he was going or how to get there, but he was determined to make the journey.

In the end, Harry required human intervention to make his transition. It was a hard decision to make and it was even harder to make that final visit to the vet’s office. But Harry deserved some rest and relief from his growing incapacities and the pain it was becoming more apparent that he was feeling. I was glad that we were able to go at a time when he wasn’t in immediate distress, so that he didn’t have to make his exit at a time of crisis and pain. He was calm and willingly left the cat carrier in the vet’s waiting room so that he could be held by his human companions. His last few moments were filled with lots of stroking and kisses. I was able to tell him I loved him and how much I appreciated him sharing his life with me. There’s now a very big Harry-sized hole in my heart and in my world.

The Theosophists have an interesting idea which they borrowed from the eastern philosophies they studied, that combines evolution and reincarnation. They believe that not only does each soul go through a series of lifetimes, but that the soul climbs the evolutionary ladder, beginning in the mineral kingdom, moving on to the plant and animal kingdoms, and then eventually becoming human. The highest form of animal life is thought to be domesticated animals, whose souls have become more individualized. They are living with humans in order to learn how to become human (which means it’s very important how we treat our domestic animals). If this theory is true, then Harry, one of the most evolved animal souls I’ve ever met, will soon be beginning life as a human being.