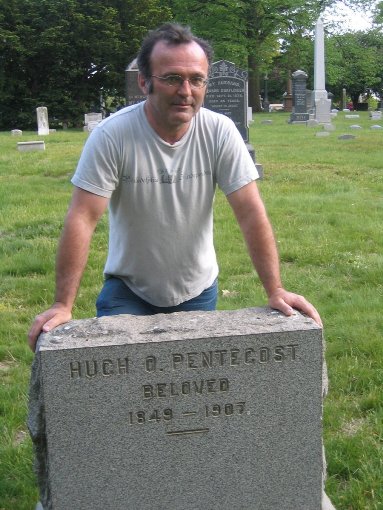 Robert Helms at Pentecost's gravesite, Brooklyn’s Green-Wood Cemetery, Lot 21816
Because he changed into so many different suits during his long career, historians have not focused on the dashing radical orator Hugh O. Pentecost.

Born September 30, 1848 at New Harmony, Indiana, Pentecost was given his middle name for Robert Owen, whose followers had established the town as a Fourierist colony a generation earlier. His parents, Emma Flower and Hugh Lockett Pentecost, were of English descent, with many Protestant clergy in their family tree. Hugh moved at age two to Albion, Illinois, which was founded by his grandfather, Scarborough Pentecost, Jr.

Hugh went as a boy to Kentucky during the Civil War, where he learned the printing craft and followed his elder brother George Frederick Pentecost (1842-1920), who was then a young Baptist chaplain with the Union Army. The two brothers remained in physical proximity for most of their lives, and always on friendly terms. George later became a nationally known preacher, just as famous as Hugh but speaking to conservative and patriotic audiences. They had three sisters: Cora (b. 1838), Emma (b. 1843), and Rosa (b. 1853). Rosa apparently died in childhood.

Hugh attended the seminary at Madison – later Colgate – University for the 1870-71 term, and served as pastor from August 1871 at Rockville Centre, NY Baptist Church. There he married Laura Anderson, daughter of the wealthy Brooklyn confectioner Robert Anderson, who was active in the church. In 1873, he left the congregation after a dispute over his belief in Open (or Free) Communion, which is when communion is offered to anyone, rather than only to the committed members of a congregation. On December 7 of the same year, he inaugurated a non-sectarian church at Brooklyn, which soon took the name "Church of the People." By this time Pentecost had earned the reputation of a "brilliant" and "energetic" evangelist, delivering sermons on current social questions. In May 1875 Hugh and Laura raised concerns about a certain member’s trustworthiness, and that led to their departure from the church. By late summer Hugh was pastor of the Free Communion Baptist Church at Westerly Rhode Island, where Laura died of rheumatic fever at age 24, leaving Hugh with their 3-year old daughter Christie. In 1878 Hugh became pastor of South Baptist Church at Hartford, CT, and there married Ida Gatling (daughter of the gun inventor) in 1880. Ida bore a daughter named Ida Marguerite in 1886. At this point the handsome young preacher was well-paid by the affluent society where he ministered, but his politics would not stand still.

After preaching at Marcy Avenue (Brooklyn) 1881-83, Pentecost left the Baptists, becoming "Independent Congregational" in Manhattan until 1885, then to the Belleville Avenue Congregational Church of Newark, NJ. By 1887, he had begun speaking for Henry George’s Anti-Poverty Society alongside Father Edward McGlynn, who was excommunicated by the Vatican for espousing Single Tax land-reform theories. He wrote "The New York Letter" column for Herald of Gospel Liberty (Portsmouth NH), from November 1885 until August 1886. For a while, Pentecost was associated with the Knights of Labor, but he distanced himself from organized labor entirely by 1889.

After an unsuccessful bid to become the mayor of Newark, Pentecost drew the wrath of the mainstream newspapers by strongly denouncing the November 11, 1887 execution of Chicago anarchists in the Haymarket Affair, from his pulpit on the Sunday after the hangings. His sermon on the "Four more men murdered" held that the dead anarchists were better than some of those who denounced them, and that their punishment would not arrest their movement. On December 11 Hugh resigned his pastorate, and on the 26th attempted to give a farewell sermon to his divided congregation. However, he was too distraught to speak and his brother George took the pulpit in his place. At that time, Hugh left Christianity entirely and began delivering sermon-like lectures to the "Unity Congregation" of his own creation, three times every Sunday in Brooklyn, in Manhattan, and in a skating rink adjacent to his former church in Newark. He did not stop citing biblical scripture when making his arguments.

These lively discourses, which blasted organized religion and denounced landlordism, became the text for his new journal Twentieth Century , from March 1888. Pentecost remained loyal to Henry George’s single tax, but he also embraced anarchism for about two years. The journal became a success and was widely distributed; the sermons, with titles such as "The Sins of the Government," "Anarchism," "The Crime Of Owning Vacant Land," "Murder by Law," and "A Bad God and a False Heaven," drew full houses each week, and were followed by musical recitals, often with vocals by Ida. These were the peak years of Pentecost’s career, when his talks were the regular subject of public debate. In 1889 the Philadelphia police shut down a meeting he was to address on the anniversary of the Haymarket executions, and in 1890 he was one of the scheduled speakers for the stridently anticlerical "Yom Kippur Ball" in Brooklyn, which was banned by order of the mayor. For several days afterward, the dailies carried long interviews in which Pentecost explained why people dissent from religious orthodoxy and blasted the mayor for suppressing free speech. While his views were not always purely anarchistic, he was widely regarded as the great "anarchist preacher" of the time. Also in 1889, Hugh wrote a long essay on "The Crime of Capital Punishment," which was published in The Arena , an important journal published by his first cousin Benjamin Orange Flower.
​
Another sea-change began for Pentecost in 1891. First he took a secondary role in the fall season, giving the main addresses to other writers. By the end of the year, Hugh had retired from his podium and passed Twentieth Century to another editor in order to study law informally for all of the year 1892, returning to action as a defense attorney at the age of forty-five. He seems to have kept his eye on human rights in his choice of cases. By this time his famous father-in-law Richard Jordan Gatling had lost his fortune because of the invention of the Hotchkiss Machine Gun, and was also in failing health. Hugh was trying to find a new income for the family, which included his daughters, aged 7 and 19.

At the end of 1893, Hugh made the great blunder of his life, following the advice of his wife, as he later said. New York’s newly elected District Attorney announced Hugh Pentecost as one of his assistants, and immediately the idea exploded in a storm of public outrage against the "anarchist attorney," with his earlier radical opinions frantically repeated in the newspapers. He arrived elegantly dressed on New Year’s Day, but he was not sworn in. Worse still was his letter, declining the appointment and explaining why he did so. Reversing every word he had uttered in the preceding twenty years, Pentecost stated that "I was not a lawyer then," when he had "jumped to the conclusions suggested by my emotions," and denounced the execution of the Haymarket anarchists. After studying Law, he wrote, "it dawned upon me that this is not a world of dreams… and I ceased to indulge my Utopian imaginings." He even renounced the single tax, and declared loyalty to the Democratic Party. The letter was published for a stunned readership in Twentieth Century , its phrasing neither forgotten by his former allies nor forgiven by many. The "blackmailed harlot," as one anarchist labeled him, was reminded of it till his last years, and again in his obituaries. Needless to say, the letter gained him no favor on the side of Law and Order. Actually harming only himself, the whole affair brought Pentecost profound humiliation.

Hugh lived another thirteen years, during which he continued practicing law, even arguing one case before the U.S. Supreme Court. He resumed his lectures to a revived Unity Congregation at Carnegie Hall in the late 90s, always maintaining a radical note. However, Pentecost was never again taken as seriously as he had been before his debacle at Tammany Hall. He died of heart failure on February 2, 1907 at age 58, and was buried in the family plot at Brooklyn’s Green-Wood Cemetery, lot 21816, section 153. Ida Pentecost died four years later. Buried alongside Hugh are both his wives, his two sisters, his brother George, and George’s second wife Ada and son Hugh. We cannot yet explain why there is just one simple grave marker in the family plot. It stands in the center of the plot and reads as follows:
Hugh O. Pentecost
Beloved
1848-1907

"Hugh Owen Pentecost: The Famous Preacher and Where He Came From" Manitoba Daily Free Press , September 14, 1889.